You might also want to
visit our other websites

Left-handed scissors are an important tool for left-handed children.  Besides the obvious benefits of being able to cut paper and participating  in arts and crafts projects, scissors are the first hand tool that a child learns to use. If they do not properly develop their skill and confidence with scissors at an early age, they are not likely to feel comfortable with other tools, such as screwdrivers, pliers, and wrenches, as they get older.

Many people do not understand the difference between left-handed and right-handed scissors, and they believe that as long as the handles are symmetrical a scissors can be used in either hand. But the myth of scissors that are made “for left-handed or right-handed” use, is really just a myth.

The scissors on top are left-handed, bottom scissors are right-handed.

With a brand new pair of right handed scissors a left-hander can manage to cut their paper, but as a scissors is used more often in the wrong hand, the joint that holds the two blades together starts to become loose, leaving a gap between the blades where the paper or fabric can bend rather than being cut.  Left-handers can adapt by changing their cutting motion…instead of pushing straight down with their thumb, they push outward with their thumb to force the blades back together so they touch. This can work for the first couple of cuts, but this unnatural motion is very uncomfortable and causes a left-handers hand to cramp and even become numb. 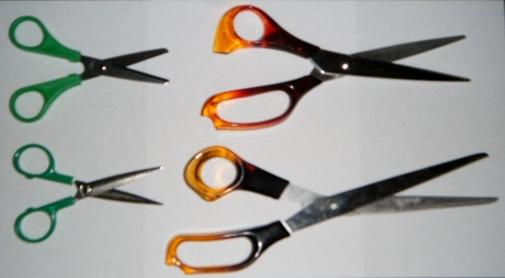 You can read more about lefthanders on our affiliated websites